Aman was arrested in Havana for waving an American flag– as an apparent “ship of fools” arrived in Havana’s harbor. The vessel was filled with tourists eager to enjoy themselves in the island prison– a sad and morbid style of tourism.

A Cuban dissident was arrested on Monday for waving the American flag near the Havana pier where the Carnival cruise ship Adonia docked on Monday.

The man, Daniel Llorente, was holding the flag across his back at the waterfront as the ship approached. He was detained after making a speech about liberty on the communist island. It’s unclear what charges were leveled against him.

A video of the event shows a crowd of tourists and locals gathering around Llorente, and him getting into a verbal exchange with an unnamed woman. The arrest was first reported by Noticias Martí, a Miami-based news organization focused on Cuba.

“You’re making a clown of yourself,” the woman told him. “The American flag. What are you doing, for God’s sake?”

“What are you doing here? Hypocrite,” Llorente said. “This is a symbol of American pride.”

Cuba is the ultimate representation of globalism– where the good of the collective comes before the God-given rights of the individual. As such, anything a person says or does can be considered disruptive to the interests of the Communist government.

Everything is controlled in Cuba, which means that the government restricts food consumption, population growth (through a horrific 60% rate of abortions). In addition, Cuban citizens do not have the right to peaceful public assembly nor to move freely inside the island. Anything considered suspicious can land the person in jail– or worse.

But the above Dantesque scenario did not stop Obama from enacting his one-way “diplomacy” with Cuba, which has proven to be a total embarrassment  considering the barrage of insults and condemnations spewed at him by Fidel Castro and his thugs, since his “historic” visit to Cuba. In fact, the insults began as soon as Obama left the island.

Señor Trump, I admire your rejection of globalism, as expressed in your foreign policy speech on April 27.  I have raised my glass in support of your campaign for POTUS– but remember that there’s no such thing as a “deal” with Communists. You have said that you will always improve or change on issues where you are wrong. Two of these issues are abortion and Cuba’s rogue government. I have always insisted that you must be absolutely strict against both– because they involve matters of life or death– where there’s no room for “deals.”

Please listen to the pleas of the dissidents and political prisoners inside Cuba and the voices of those of us, freedom-loving Americans that support you–  who survived Communism, the most horrific totalitarian nightmare known to humanity, with over 120 million dead victims– and counting. 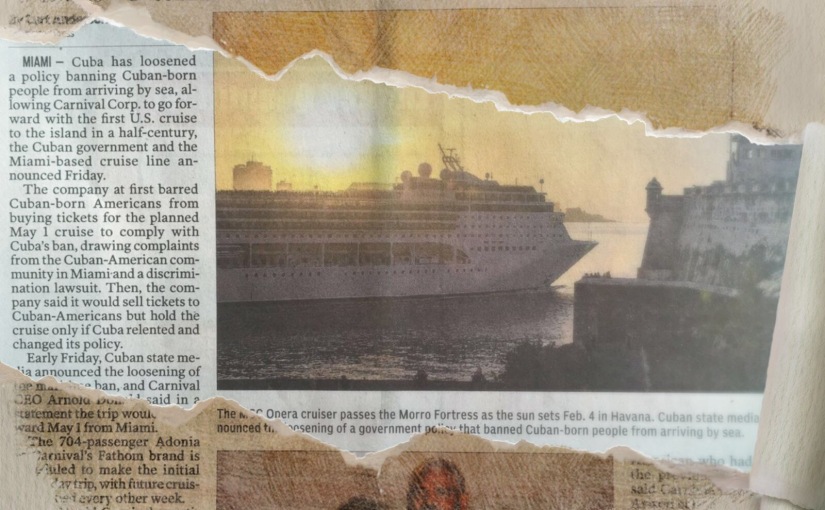 Keeping track of the history that the Communists and their collaborators want you to forget.

The pages of history are being torn before our very eyes, by ignoring the fact that for decades citizens in Cuba have not been allowed access to beaches and resorts reserved only for foreign tourists.

This Communist Apartheid involves many other locations, including hospitals, which the Communist dictatorship of Cuba declares off limits to its citizens, at any time, pursuant to its nefarious agenda. This means that Cubans must seek “medical” care at the notorious subhuman facilities– which are effectively death traps for the infirmed.

Given the above fact, why are Americans so surprised that Castro’s dictatorship would prohibit the entry of Cuban-born tourists from outside the island?

Why is it that this Communist Apartheid is noticed now, as a result of the Carnival Cruise ban of Cuban-born tourists, in support of Castro’s policies?

But the most embarrassing part of this issue is, why would a Cuban-born person who was able to get out of that hellish island prison want to vacation there?

We’re witnessing the deeply corrupt and morbid environment of doing business with the Devil.