This should not be a surprise. Comey’s testimony is riddled with inconsistencies. He left so much to be desired. President Trump acted following the recommendations of Attorney General Jeff Sessions. Please also note the Memo written by Deputy Attorney General, Rod J. Rosenstein, to the Attorney General. These three important documents are provided below. 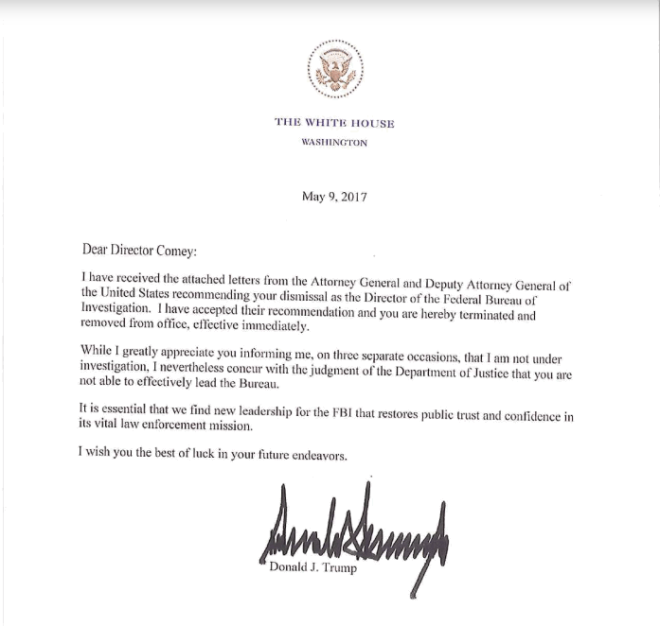 Americans are walking around these days overwhelmed with the amount of information coming at them about the corruption taking place at the highest levels of the U.S. government.

In less than a week, Pandora’s Box has exploded– and corruption is being revealed from every corner in Washington and across this nation.

This is socialism in action, unfolding before your very eyes.  Socialism has been working its way through all levels of government, and it is giving the American people a taste of the tyranny that will follow. I am a survivor of communism. As such, I speak from experience.

Here are just a couple of examples of socialist corruption revealed in the course of this past week:

→ U.S. Attorney General Loretta Lynch refuses to comply with leading members of Congress in answering questions about the 1.7 billion dollars in cash that was  secretly flown to Iran earlier this year. The accusations are that Lynch has “pleaded the fifth” Amendment in order to avoid incriminating herself in connection with the money delivered by Obama’s administration to the extremist Islamic thugs in the Iranian government.

→ James Comey, Director of the FBI, has reopened (some say, continued) the investigation into Hillary Clinton’s emails, which could lead to an indictment for her acts / negligence involving classified and sensitive information.

“Investigators found 650,000 emails on a laptop used by former Rep. Anthony Weiner and his estranged wife Huma Abedin, a close Clinton aide, and underlying metadata suggests thousands of those messages could have been sent to or from the private server that Mrs. Clinton used while she was secretary of state, according to people familiar with the matter.”

In the meantime, the socialist element that makes up the Republican establishment has declared a war on Trump, because he represents the end of their lies, corruption and political pantomimes in Washington DC.

This is what socialism looks like. It is deceptive at best and repulsive at worst.

Save yourselves and your loved ones. Save this nation. Vote for Donald J. Trump.