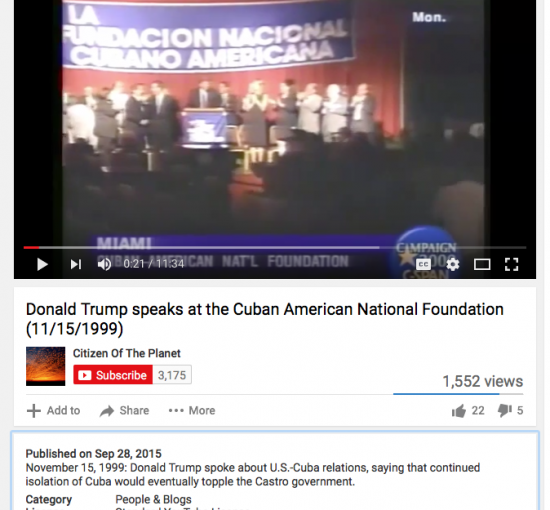 Excerpts from Donald Trump’s speech before the Cuban American National Foundation 16 years ago:

“We must not reward Fidel Castro with trade, our currency, or respect.“

“Frankly, the embargo against Cuba must stand, if for no other reason that if it does stand he will come down, he will tumble down and it will finally happen.”

“What a waste of energy, and time and effort if this government opens up Cuba before Castro is gone. It’s going to line his pockets, the country will become wealthy again, and it will have the same regime it’s had for so many years, and that’s the regime headed by Fidel Castro– and its inconceivable to me when I see the weak stance taken by our current administration– inconceivable that this can happen, specially with the spirit in this room, because the spirit of the Cuban people is beyond any spirit that I’ve seen by any people– and I’ve been watching it for a long time.”

“I’ll either be the greatest developer in the country, or the greatest president that you’ve had in a long time.”

On October 24, 1999, Donald Trump officially announced his candidacy for President of the United States on the Reform Party platform. He delivered the following speech at the Cuban American National Foundation in Miami on November 15, 1999:

The testimony of a survivor…