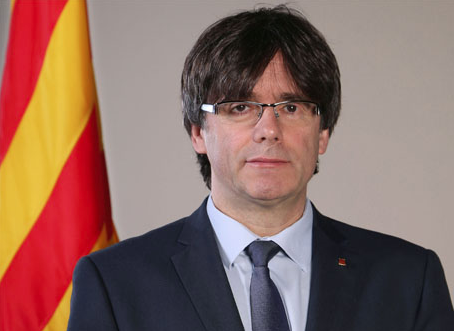 Puigdemont and his rogue team of separatists

Carles Puigdemont, as the President of the Government of Catalonia (Catalan: Generalitat de Catalunya), an autonomous regional government, should be held legally accountable– along with his rogue team of separatist politicians– for endangering the lives of thousands of people who took to the streets to protest and vote on an illegal referendum for the “independence” of Catalonia. This illegal referendum ignored the anti-independence wishes of over half the population in that region– a perfect example of socialist “democracy” by “consensus”– which means that a minority decides what’s good for the majority of us!

But let’s go back to the protests…

These “independence” protests, which on the surface appear to be spontaneous– are far from it.

These socialist-style “peaceful” protests are always orchestrated to challenge authority, while taking advantage of liberal media coverage, knowing full well that the mainstream media always paints law enforcement in a bad light. This manipulation of people’s emotions may work well for the socialist and or naive viewer– but it is an insult to the intelligence of millions of people who cannot be fooled, and who respect the rule of law.

Fortunately, hundreds of thousands of Catalans against illegal “independence” took to the streets on Sunday to show enormous support for law enforcement officers sent by the federal government in Madrid, and marched proudly– as they wrapped themselves in the flag of Spain.

Puigdemont should also be held legally responsible for the thousands of jobs lost across Catalonia, as corporation after corporation left the region, in order to avoid the political and economic nightmare created by the separatists. Frankly, I don’t know if these corporations will ever or should come back, with Puigdemont and his ilk in charge!

Catalonia is a region in Spain which enjoys an autonomy never seen before in the Spanish territory. During the last 40 years Catalans have enjoyed incredible freedom and benefits under a Spanish constitution– which the people of Catalonia overwhelmingly approved. So, this business of “independence” is simply a socialist-separatist ploy to advance a “social justice” agenda, which has little to do with language and culture. And if you don’t know the danger of a “social justice” agenda– all you need to do is look at the poster child of “social justice”– Cuba!

Which leads me to the next point…

Don’t you find it interesting (and revolting) that while Puigdemont and his rogue team of social justice warriors claim “freedom, justice and independence” for Catalonia– they are HUGE supporters of the Communist brutal dictatorship in Cuba?

Puigdemont’s speech on October 10: “An exercise in cynicism”

Puigdemont’s speech today before the Catalan (Regional) Parliament was not just an embarrassment– it was a string of empty words and lies to the people of Catalonia and to the people of Spain– and to anybody else who wasted their time watching and listening to him, including this writer. In the words of Ignasi Guardans, a Catalan lawyer and former MEP, Puigdemont’s speech was an “exercise in cynicism.”

Puigdemont, who declared today that Catalonia is “independent” (but in a back-burner-sort-of-way)– also wants to “dialogue.” There’s only one problem: there’s no one to dialogue with– because no one is interested.

So, it’s time for the Spanish government to apply Article 155 of the Spanish Constitution, before the rogue “government” of Catalonia destroys the region, by continuing to put its citizens in harms way— along with their political and economic institutions.

Honoring the Spanish discovery of the New World, in view of the socialist and Islamic extremist threats.

Continue reading: Under this Crown… in 2014

Any adds that appear below are ABSOLUTELY NOT endorsed by this website; however, please do read additional commentaries, which also appear below.

Today I would like to talk about coal, the valuable sedimentary rock that God created.

In June of this year, the EPA announced new rules under President Obama’s Executive Order, covering CO2 emissions from fossil fuel-fired electricity generating plants under the Clean Air Act (CAA). This is another blow to the coal industry, which has concentrated on clean coal technology, in order to meet the ever-increasing demands of environmentalists.

According to a U.S. Chamber of Commerce study,  these overwhelming and complex new rules “threaten to suppress average U.S. Gross Domestic Product (GDP) by $51 billion and lead to an average of 224,000 fewer jobs every year through 2030, relative to baseline economic forecasts.”

The socialist strangling of the coal industry is the result of Obama’s Climate Action Plan for greenhouse gas (GHG)– as part of his goal “to lead international efforts to address global climate change.”

President Obama may be trying to make the United States a leader in climate change rules– but Germany, for example, is simply not impressed.

Germany is shutting down its nuclear power plants, and companies like RWE (Rheinisch-Westfälisches Elektrizitätswerk) are building new coal-fired plants in Hamm, in the North Rhine Westphalia region, as well as in the Netherlands.  E.On, which is Germany’s biggest power producer, is following in the footsteps of RWE and is erecting a new coal-fired plant in North Rhine Westphalia. A state-owned Swedish company has built a coal plant outside of Hamburg. Other coal plants are going up in Karlsruhe and Mannheim.

Meanwhile, in the United States, companies like Stericycle, Inc. and Covanta are being rewarded with taxpayer money through public-private partnerships (PPPs)– because they are willing to ride on the environmentalist band wagon, in support of “sustainable” waste management services as energy sources. All this fancy environmental wording sounds good, until you realize what is really behind it:

Excerpt from my article titled,
The Gates of Hell: Aborted Babies used as Waste to Generate Electricity – April 25, 2014):

“Newspapers across the world are covering this story, which describes how homes in Oregon have been powered through processed “waste” that may include the incinerated tissues of aborted babies– and that the incineration is taking place at the Marion County Resource Recovery Facility, in order to generate electricity.

Some of the fetal material came from the Canadian province of British Columbia, where regional health authorities have a contract with waste management firm Stericycle and send biomedical waste, such as fetal tissue, cancerous tissue and amputated limbs to the Oregon facility, said Kristy Anderson, a spokeswoman with the British Columbia Health Ministry.

Stericycle, based in Lake Forest, Ill., has been criticized by anti-abortion groups for years because it disposes of aborted fetuses collected from family planning clinics. Company officials did not return phone calls seeking comment.

In addition to the reported use of aborted fetuses from abortion clinics, here is a taste of what else is going on in the  “sustainable” waste management world of public-private partnerships (in other words, your taxpayer money at work)– as described by the publication American City and County, established in 1909 as a “voice of state and local government:”

“Nearly 1,000 New York government entities will receive a check for overcharges as part of a $2.4 million settlement with one of the nation’s largest medical waste disposal companies. Under the agreement, Stericycle, Inc., will fully reimburse New York police and fire departments, schools, hospitals, prisons and other entities for a scheme to charge automated price increases without notice and in violation of contract terms.”

In contrast to the above socialist corruption, coal has been a time-tested natural source of energy, made clean and more efficient through modern technology.  Indeed, coal has helped make the United States the wealthiest nation on earth, as a vital source of energy.  But the ever-increasing socialist tyranny established by global environmentalists, along with socialist-based government subsidies of “sustainable” energy sector companies like Stericycle, Inc., and Covanta, have badly wounded the coal industry and the coal miners, who have dedicated their lives to extracting this sedimentary rock from deep under the earth.

Spain is a perfect example of the decline of coal mining. Sandwiched between environmental rules and pre-pension plans through socialist initiatives, the coal miners of the Valley of Turón in the province of Asturias, now find themselves abandoned after the European Union announced that coal subsidies will end in 2018.

Mining operations in Spain have experienced a decline over the past several decades, in spite of the growing demand for raw materials that are extracted from coal. The European economic crisis, austerity programs, unemployment, strict environmental regulations in the production of electricity, coupled with  “sustainability” measures, have thrown the Spanish coal industry into an abyss. This environment has not helped Spain become a competitive participant in the international sector, as a provider to energy hungry markets like China and India. As such, some Spanish mining centers have opted for conversion to tourist and/or religious attractions.

Culturally speaking, these mine conversions are not new, such as the catacombs in Paris, located at Place Defert-Rochereau, which are underground ossuaries that fill the caverns and tunnels of old stone mines.

Coal mining has been the main livelihood and culture for generations, in this proud northern region of Spain. Sadly, while these miners watch Germany expand its coal industry, the number of coal miners in Spain has fallen from approximately 40,000 to somewhere between 2,600  to 3,000.

Left with nothing but memories and a culture that they wish to preserve, the Coro de Mineros de Turón (the Miner’s Choir of Turón) sings to Santa Barbara Bendita (Blessed Saint Barbara)– the patroness of miners. They sing dressed as if ready to go down to the mines. Their short video, which I present below, is both heartbreaking and inspiring.

At the rate Obama is going with his climate change rules, American coal miners may need to start looking for a choir director.

Someone has to say the truth… please share it.

THE GATES OF HELL: Aborted Babies used as Waste to Generate Electricity